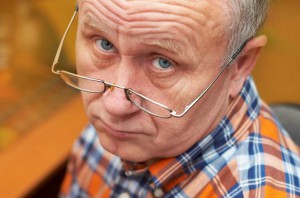 According to a recent report from the Alzheimer’s Association (Alzheimer’s from the Frontlines: Challenges a National Alzheimer’s Plan Must Address), as many as 5.4 million Americans today are living with Alzheimer’s, and that number is predicted to increase to 16 million by mid-century. While there’s still a lot to be learned about the disease, some surprising new evidence is pointing to a link between cynicism and a person’s risk for dementia.

According to a new study, older adults who possess a cynical nature face a higher risk for dementia. The study, published in the scientific journal Neurology, surveyed people who had an average age of 71 to discover their level of distrust when judging other people. All participants were screened for dementia initially and then again an average of 8 years later, and the findings were shocking. Those who had shown high levels of cynicism were three times more likely to develop dementia than their uncynical counterparts.

You can trust the professional care team at Hillendale Home Care to improve the quality of life for your loved one with Alzheimer’s through companionship and assistance with a full range of services, from just a few hours to around-the-clock, 24/7 care. Visit our website for more information about our Walnut Creek area home care services or call us any time at 925-933-8181.

A Brain Implant to Restore Memory in Dementia Patients? How to Be a More Patient Caregiver
Scroll to top