“ A daughter’ story how to cope when moms in pain” 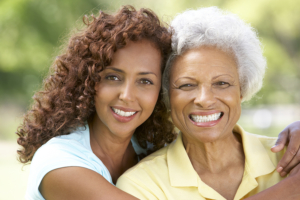 When Megan finally was able to sit down and spend some quality time with her mother, she noticed that her mother grimaced from time to time, especially as she tried to get up.  The more than she paid attention to this emotional reaction that appeared on her expressions, the more Megan realized that her mother was in pain.  She tried to talk to her about it, but her mother dismissed her concerns.  She told her daughter not to worry about it, that she twisted her ankle or something and that it would get better over time.

For Megan she didn’t believe that story.  She knew her mother and she knew that her mother was a proud woman who would say anything to deflect attention from herself, especially if that attention revolved around any type of concern for her.

So Megan began to look into different things that she may be able to do in order to alleviate the pain that her mother was feeling.  She stumbled across the idea of having an in home care provider work with her.  Her mother could end up relying on this other person, this caregiver, for any number of things around the house that would give her body the time that it needed to heal, depending on what was wrong.

Megan would also have someone on whom she could count to help her mother get in shape, if that’s what the doctor ordered for her.  She brought up the idea to her mother and after some resistance at first, her mother warmed to the idea.

It turned out that Megan’s mother was dealing with arthritis, something she had never experienced before, and as it would progressively get worse, it would make doing all sorts of regular activities more difficult.  Hiring elderly care was a great move by Megan for her mother.

If you have a loved one who could benefit from elderly  care near Moraga CA,  contact the caregivers at Hillendale Home Care. We help seniors and their families with many levels of home care service. Call (925) 948-8280 for more information.

Insomnia and Senior Care in Concord CA: How It Can Impact Care and Health! Video: Home Care Walnut Creek CA: Do some home care agencies specialize in Alzheimer’s...
Scroll to top